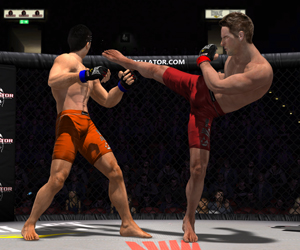 We were thrilled to see all the great responses to Bellator: MMA Onslaught at this year’s E3. Take a look at some of the reactions, including some very detailed previews and overviews of the game’s features.

Gamezone: “From the interface to the entire fighting mechanic, we instantly felt a Street Fighter vibe; this vibe is totally unlike anything you’ve seen in a MMA title to date, and it’s executed in an outstanding way. Oh, should we mention the game looks absolutely gorgeous?”

MiddleEasy: “My final verdict is it’s impossible to call yourself an MMA fan and refuse to buy this game. It’s $15 dollars. There’s no reason why you can’t afford that minor amount of cash for countless hours of standing on your sofa, screaming ‘Oh [expletive] did you see that knockout?!'”

XBLA Fans: “Character creation also comes with the ability to mess around with the type of fighter being molded. A handful of fighting elements can be invested into in order to make a character that appeals to your preferred style of fighting. These attributes can then be leveled up through fights. As a nice little bonus, any character created in the game’s forthcoming XBLA demo can be carried right on over to the full game once purchased.”

Platform Nation: “Kung Fu Factory knew what they wanted to make and they made it, but here comes a bit of the happenstance nature of the Wild West: they’re willing to change just about anything for the fans. If it hadn’t come across as accommodating to the fans, it would have appeared desperate as the three folks from the studio I sat down with seemed obsessed with pressing the notion of anything can change if the players want it. If they want new moves or fighters, the studio will try their damnedest to make it happen.”

GotGame: “Here’s the knockout punch though: retail value, as mentioned by 345 Games themselves, is estimated to be about $15 on the PlayStation Network or Xbox Live. A full combat sports game, for half the price of the big guys. Plus, 345 Games has no plans to stop there – they have their sensors out there, listening for what players want, and they plan on releasing patches for those needs.”

NoHighScores: “As you win bouts, you earn experience to put towards new moves, but in the interest of balance, no fighter will ever be able to be fully maxed out. As a nice bonus, if you download a trial of the game and make a fighter that you can’t bear to be without, you can keep him when you unlock the main game. Once you’ve spent time honing your craft in the single player, you can go online for ranked matches. Get on the leaderboards and you may see your name displayed during a real life Bellator match.”

This site uses Akismet to reduce spam. Learn how your comment data is processed.

We're a Los Angeles-based independent game developer devoted to creating fun games of all kinds. Whether mobile, console, or free-to-play online, our team of industry veterans brings their unique experience to the goal of making every game we produce an innovative, entertaining experience that you can't put down.

Any cookies that may not be particularly necessary for the website to function and is used specifically to collect user personal data via analytics, ads, other embedded contents are termed as non-necessary cookies. It is mandatory to procure user consent prior to running these cookies on your website.