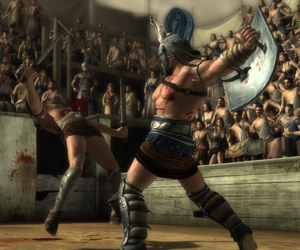 We’re very proud to announce that we’re developing Spartacus Legends, an upcoming Xbox Live and Playstation Network game published by Ubisoft. Spartacus Legends will be playable this weekend at Comic-Con in the Ubisoft and Starz Media booths.

Spartacus® Legends is a brand-new fighting game coming to Xbox LIVE® and PlayStation®Network in early 2013. It follows the journey of gladiators, from gut-wrenching training to raw, visceral combat in the arena, usually ending in death. Impose your will on the competition, rise through the global ranks and become legendary in battle. Featuring thousands of ruthless weapon combinations and a robust skill system, Spartacus Legends allows you to customize your gladiators and mercilessly dismember your enemies, limb by limb. Challenge your friends, your foes or the worldwide leaderboards, online or offline, to forge your destiny and fight for your house honor. Two men enter the arena, will you come out alive?

This site uses Akismet to reduce spam. Learn how your comment data is processed.

We're a Los Angeles-based independent game developer devoted to creating fun games of all kinds. Whether mobile, console, or free-to-play online, our team of industry veterans brings their unique experience to the goal of making every game we produce an innovative, entertaining experience that you can't put down.

Any cookies that may not be particularly necessary for the website to function and is used specifically to collect user personal data via analytics, ads, other embedded contents are termed as non-necessary cookies. It is mandatory to procure user consent prior to running these cookies on your website.